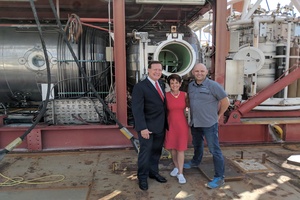 Consolidated Ship Repair welcomed Congressman Randy Weber to their Port Arthur, Texas shipyard. As one of the largest waterfront facilities on the Sabine Ship Channel, CSR is ramping up in preparation for the oil and gas market rebound. Managing Director Trevor Davis explained recent equipment acquisitions have positioned the organization as one of the go-to shipyards in the area.

“Our 23-acre secured shipyard features heavy lift crane services that support ship repair and conversion, marine fabrication, load-outs and other projects,” Davis said. “In the past couple months, we have bought more equipment which provides our team more opportunities to work with industry heavy hitters.”

Because of the new services and equipment, Davis predicts CSR will bring 50-75 jobs to the Sabine Ship Channel. Sharing his plans with Congressman Weber, Davis explained why he chose to purchase the property in the height of the industry downturn.

“I recognize it was a bold move to purchase this property in 2016,” Davis shared. “However, at the time we knew companies needed a place for their vessels and barges to dock as they had no present purpose. We also knew those same companies would need fabrication, ship repair and heavy lift crane services once there was a more optimistic industry outlook.”

In addition to allowing CSR to take on larger and more complex fabrication projects, the property is also one of five operating spool bases in the U.S.

“As I explained to Congressman Weber, CSR has all the components and services to be the premier shipyard on the Sabine Ship Channel,” Davis said. “I look forward to our company’s continued evolution, which includes growing our team to better serve the oil and gas industry.”